We’ll finish up the week with #1 on my list of Top Ten Disney films, then next week…back to the shorts, with a bit of a surprise. So, time for the big one…

1. Pirates of the Caribbean: Curse of the Black Pearl 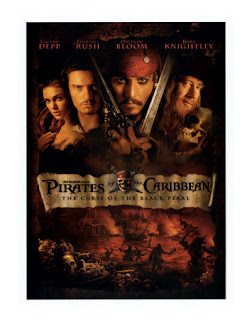 Say what you will, but the Pirates trilogy is officially my favorite film trilogy. I put a great deal of that into one person – Johnny Depp. 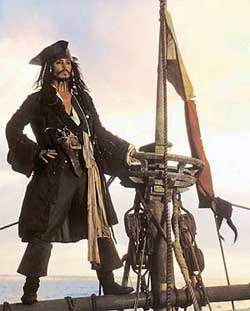 Captain Jack Sparrow is probably the most unique and wonderful character in Disney film history. There, I said it. Mary Poppins is great, and Julie Andrews did a magnificent job portraying her, but Jack Sparrow is something altogether new and different, and there was no source material for Depp and the writers to draw from.

But the greatness of this films lies not just in Depp’s performance (which should have won him an Oscar). No, it’s the way that the film twists, turns and drives the viewer over cliff after cliff, never knowing when the characters will hit bottom and begin to rebound, while all the while making the ride enjoyable and exciting.

Keira Knightley made her name here, and there’s good reason for it. Her performance as Elizabeth Swann is thrilling, providing another Disney royal female (she’s technically not a princess) to the stable. Elizabeth is a character yearning for more, similar to Belle or Jasmine, but she is more active and cunning than either of those princesses show in their films. 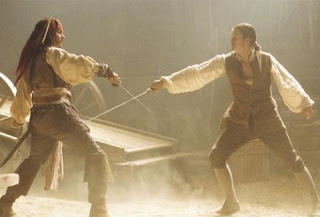 Orlando Bloom’s acting does nothing for me, but as Will Turner, he provides a great contrast to Depp, playing the straight man who provides the counterpoint to the world of piracy. Geoffrey Rush’s Barbossa is over the top in a good way, and Jack Davenport (a favorite of mine from his BBC series Coupling) is great as Norrington. Even the secondary characters are good, like Pintel and Ragetti the pirates and the two redcoats who stop Jack from stealing a ship at the beginning.

The music is also enchanting, as Klaus Badelt’s score has quickly become one of the most recognizable scores in modern film. When you hear the opening chords of the climactic fight sequence, you know it’s Pirates. Think to yourself, how many films (besides John Williams movies) can you say that about?

But the primary reason this film is my favorite is the main premise of the movie, as outlined in the beach scene between Jack and Elizabeth. As they’re stranded on the island, with seemingly no hope of getting off, Jack reveals why it is that he’s so determined to recapture the Black Pearl. 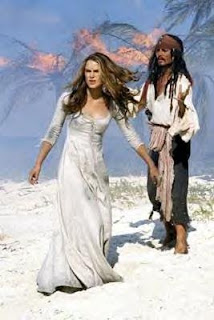 If I can paraphrase, he tells Elizabeth that a ship is more than sails, deck and rudder. Those are what make a ship. In truth, Jack says, a ship is freedom. The knowledge that you can go anywhere on the open sea, making your own way, regardless of any rules is what Jack is after. In truth, it’s what Elizabeth is after, and it’s something that is buried deep inside of Will, and a desire that he has to come to grips with in order to save his conscious desire of Elizabeth.

That notion of freedom is very appealing to someone who works in corporate job (like me), has two beautiful kids (like me) and has a lot of responsibility (like…oh, you get it.)
The fact that you could be absolutely free, confident in the knowledge that any path you choose is your own…that’s what makes this movie escapism on the highest order, and that’s why it’s my top Disney film.
Posted by Ryan at 3:01 PM