Today’s short features all the usual suspects – Alice, Julius and Pete – yet it feels like more of something that you would expect from Mickey Mouse, perhaps giving us a glimpse into the future. I have yet to get to the Mickey shorts, but it would not surprise me at all to see elements from Alice Picks the Champ in one of the Mickeys.

It’s a predictable cartoon to say the least, with a familiar set up to anyone who has watched cartoons over the last few decades. Pete, the boxing champ, has set up camp in a local gym, and is offering $50 to anyone who can stay in the ring with him for five minutes. Of course, the money is intriguing to the seemingly always broke Julius and Alice, and Alice encourages Julius to take his shot at the champ. 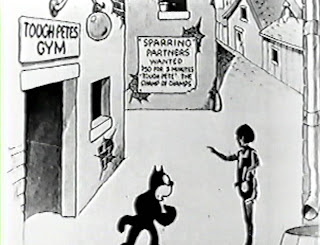 A reluctant Julius waits outside in line as Pete dispatches his own shadow, a pipsqueak mouse (foreshadowing Mickey?), a turtle and a giant hippo in short order. Julius, of course, is none too pleased with this parade of animals being dragged out, and turns to run, but gets dragged into the room with Pete by a giant hook, like a vaudeville act. 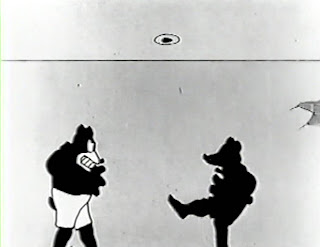 Of course, Pete roughs him up for a while, causing horrible sounds to emanate from the room. Alice takes a second to peek through the keyhole and sees Pete using poor Julius as a pogo stick. 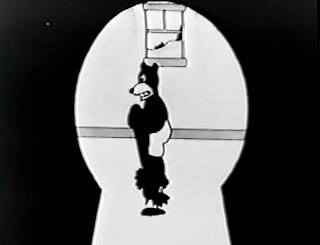 Eventually, though, Julius gets the upper hand, as Pete pastes him up against the wall, then Julius ducks as Pete punches through the wall. Pete gets stuck, and Julius goes to work, working over Pete’s tail and rear end with a frenzy. 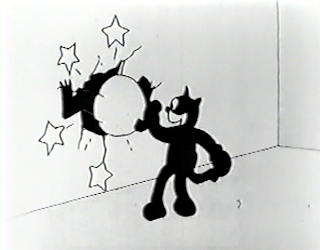 The final confrontation happens in a very cool way, with both fighters being highlighted in shadow only, struggling to reach a nearby bottle. One hits the other over the head with the bottle, and cheers emerge from the room. 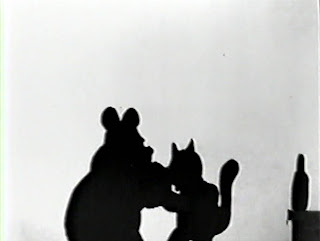 At first, Alice begins weeping, because she assumes that Pete has won, but it turns out that Julius was the one who hit Pete, resulting in a crowd lifting him on their shoulders and praising him as the new champ. Alice faints dead away as the short ends.

As you can see, this is definitely something that Mickey and Minnie could be involved in rather than Julius or Alice. It’s also interesting to see the contrast in approach from something like this to how Warner Bros. would approach this with Bugs Bunny, where Bugs would constantly have the upper hand on the champ, as opposed to Julius’ scared, reactionary stance. It highlights some of the difference of the Disney characters – more being buffeted by outside forces and struggling to be in control. All in all, an entertaining short, but one that I think I will reference again as we move forward.
Posted by Ryan at 4:13 PM