So, the latest short is Margie Gay’s turn as Alice in Alice Gets Stage Struck, which is a bit of departure from the previous few shorts that star Ms. Gay. This is very much a return to the ways of the very early Virginia Davis shorts, which is unexpected, based on how things had been going.

The recent shorts were mostly animated, not bothering to have a live action framing sequence, and not making any excuses for why Alice would be in an animated world. This time, though, it’s back to the original formula.

Alice and friends are in a cabin labeled “Uncle Tom’s Cabin,” producing a short play, and the first couple of minutes of the film take place there. We see the cast getting ready, and then see Alice and a young boy acting out a scene in the “snow.” 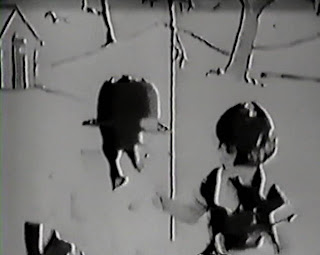 The snow is being dumped from above, and when the crew guy gets distracted from dropping snow, the director charges up at him, startling him into dropping the snow. Yep, down goes the solid snow, dropping right on Alice’s head. 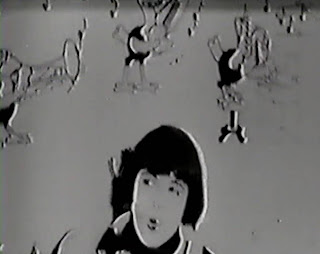 This, of course, triggers the animation, where Alice and Julius are playing in the snow. They build a snowman, throw snowballs, and dance around in a circle, in a rather uninspired bit of animation. The fun begins when a bear in a top hat skates by, and Julius inadvertently hits him with a snowball.

The bear chases Alice and Julius into a log cabin. Julius stays outside to confront the bear while Alice disappears. The bear makes various threats, and Julius promises to make him “eat those words,” and in fact does so in a rather inventive gag, literally cramming the animated letters down the bear’s throat. 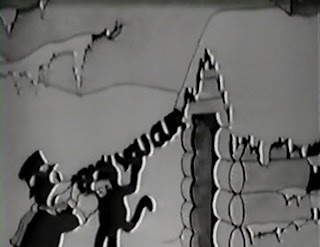 This doesn’t stop the bear, however, as he sends his dogs after Julius and Alice. Julius responds by picking up the log cabin and running away, sliding down a snowbanked hill, then into an ice flow river. This leads to another great gag, where Julius uses the question mark floating above his head to float on top of the house. Alice emerges (in an animated form) and the two plunge over a waterfall, just as live action Alice starts flailing about. 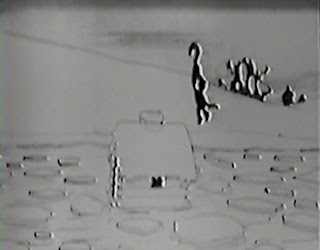 You can see, this is very similar to the early films. There is a live action framing sequence with a nonsensical animated short that really has no end. It’s quite a departure from the gag heavy, animation laden shorts that have been dominant during the first part of Margie Gay’s run as Alice.

You wonder why this return to basics approach took over. I would assume it’s because of a rush to get the cartoons out, but I’m not sure. Something to ponder…
Posted by Ryan at 2:55 PM