Our latest film is Alice the Toreador, a truly amazing effort in the quality of the animation and the sheer number of gags. At this point, the improvement from the first films to the latest is measurable. Whether it’s Ub Iwerks’ influence, as it appears, or the work of other animators learning their craft, I’m not sure. But the quality of the shorts has picked up considerably in the last 4-5 I’ve reviewed.


This film starts off with Alice and her cat friend (he’s not Julius until they’ve named him in the films!) seeing a billboard advertising a bullfight with a big cash prize. The funniest part to me is the “Bring Your Own Bull” at the bottom of the sign. That’s a different BYOB than I’m used to, I don’t know about you. 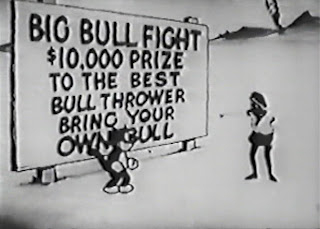 Deciding that they can defeat a bull, Alice and the cat find a nearby run down steer, manage to scoot him over to the arena, and enter the bull fight. Animals from all over town show up to see the fight, with some really clever gags, like an elephant using his trunk to lift the spectators into the bleachers being labeled “Elevator” and a cat with lots of children using a see saw to catapult the kids into the arena. 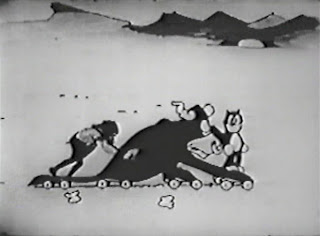 Inside, Alice and friend are reveling in how easy their victory will be, when an evil cat overhears. You can tell he’s evil because he has a handlebar mustache. Of course, he’s evil! The soon to be named Terrible Tom convinces a bull from a nearby billboard to come and switch places with Alice’s bull, in a clever bit. 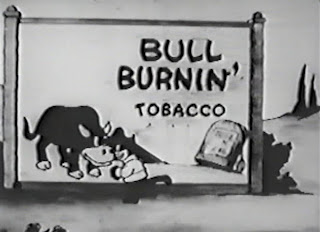 The problem comes when Tom starts fighting Alice’s broken down bull, and accidentally swings the steer into a cactus. His rear end full of thorns from the cactus, the bull cleans Tom’s clock, to the delight of the crowd. 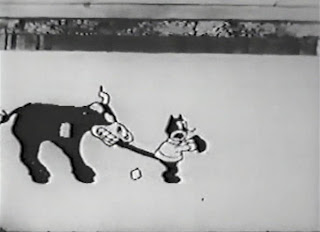 Meanwhile, Alice is faced down with the billboard bull, which is a frightening proposition. She does what any self-respecting youngster would, and runs like crazy. Eventually, the chase leads the bull into the pen, where the cat defeats the bull and runs back out dressed up in the bull’s skin. 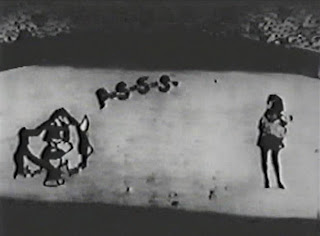 Alice handily defeats the faux-bull, and is celebrating her victory when a dog wanders onto the arena floor. The dog drags the skin off, leaving Alice and her cat alone. The crowd starts throwing things and chanting “Fake” as we fade to black.

This one is jam packed full of fun, with gags happening almost every second. There are visual gags like the bull being coaxed off the billboard and Tom’s tail turning into an exclamation point, but there are also some great subtle gags like the cat’s tail turning into a hand to scratch his head while he’s thinking. This short shows the Disney animators working hard to amp up the entertainment value. It’s one of the first ones I have watched that was not hard to get through. If this short shows how the rest of the silents will be, then I’m looking forward to them.
Posted by Ryan at 1:58 PM