More animation today, but a quick announcement first – next week, I will be moving on with the Alice Comedies, skipping over Alice the Peacemaker, which is Ub Iwerks’ first film in the series. I have been putting off this move for a while now, in the hopes that I would be able to get my hands on that film as well as several others I was missing, but that does not seem to be the case. So, first thing next week, we’ll begin with Alice Gets In Dutch, the next film. I’ll recap where we have been later this week, after finishing this series. But first, on to the top four: 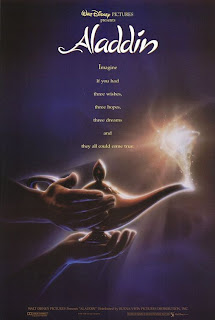 Two words: Robin Williams. Some people love him, some hate him, but as a fan, I have to say that he makes this film. No doubt, Aladdin and Jasmine are a great film couple, and the action and majesty of this film are enticing, but Robin Williams as the Genie is the top draw by far. His zany off-the-cuff remarks and anachronisms make this film more relevant to today’s audiences, although it could become dated in the future. 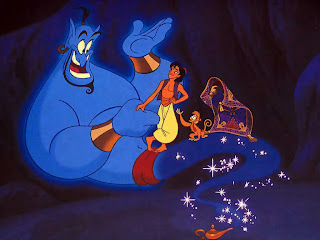 Aladdin is one of my favorite Disney heroes. He has a Robin Hood quality to him, stealing to survive, righting the wrongs, but in the end, Aladdin is looking out for himself, while sticking to a moral code. I can totally relate to this, as I’ve experienced similar feelings in my own life. Aladdin is a conflicted soul, who wants it all, but in the end, all he really wants is the ability to live his life. Very relatable, especially the older you get. 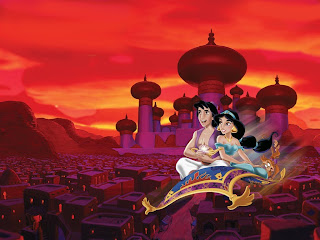 Jasmine is my favorite Disney Princess, right in front of Belle. Belle is the tactful princess who still takes charge of things – she is her own woman. Jasmine takes it one step further, deciding to run away, and show people who she really is. She refuses the arranged marriages, and scares prospective husbands away. She is alive, and roiling with conflicting emotions – the desire to see her father happy and her kingdom safe vs. the desire to find her own happiness. When she and Aladdin finally are together, it feels as though they have both earned their happy ending.

Of course, as in any of the new Golden Age films, this one has great music as well. “A Whole New World” is the centerpiece, but the variety of music here is enticing, with the big band feel of “A Friend Like Me” contrasted to the march of “Prince Ali.” There is something in this film for everyone. 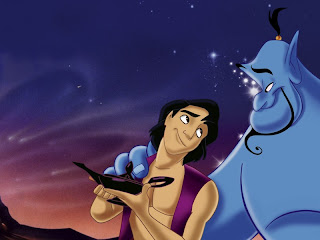 This is my favorite of the traditionally animated films, although it sometimes depends on the day if it’s this or Beauty and the Beast. My least favorite thing about this film is the horrors it has visited upon Adventureland at the Magic Kingdom, in the form of Aladdin’s Magic Carpets and the (shudder) Enchanted Tiki Room – Under New Management. Both rank among my least favorite Disney attractions anywhere.

However, the painful memories of Iago in the Tiki Room (shudder), do not obscure my enjoyment of the movie that spawned him. And Aladdin is one of my favorites.
Posted by Ryan at 2:28 PM