Alice Gets In Dutch

So, for the second film after Ub Iwerks joined the team, would the quality hold up? In a word – no. Alice Gets In Dutch is certainly entertaining, but it falls back on tired bits from earlier Disney shorts, without really breaking new ground or creating a way for the viewer to identify with Alice.

The short opens with Alice in school, as she and the kids are singing, directed by a rather stern looking school teacher. Apparently, Alice and two of the boys are not doing it correctly, as they get called up front to sing. As best I can tell, this serves no purpose to the story of the short, and it makes me wonder why Disney included that extra minute in the film. 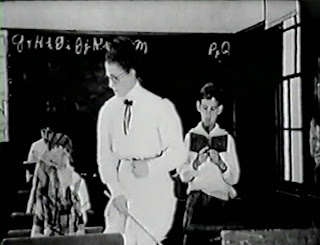 After that, one of the boys fills a balloon with ink and starts blowing it up, before handing it off to Alice to continue inflating it. As you would expect, the teacher confiscates it and pops it, with disastrous results. 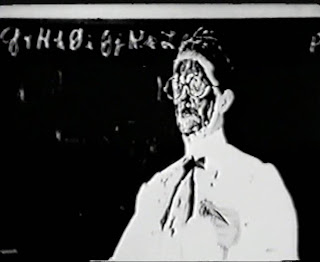 Alice gets placed in the corner with a dunce cap, and promptly falls asleep. This is another example to me of relying on some simple ideas to get into the animation. How many times in the early shorts has Alice fallen asleep to bridge the gap from live action to animation?

Anyway, she enters the cartoon world, and we see the familiar characters from Alice the Peacemaker – the dog, the cat and the donkey, partying with Alice, dancing and singing. Also included is a bear that can detach its tail in a rather creepy way, then swallow it and have it back in place. Ugggh. 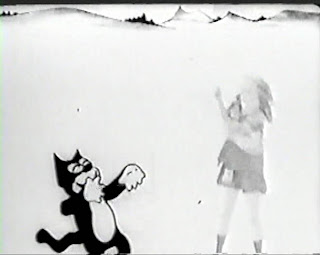 Out of a nearby school comes a caricature of the school teacher, who is incensed by the party, and sends her army of books (Reading, Writing and ‘Rithmetic according to the labels) after Alice and friends. The chase goes on for a while before the teacher pulls out a cannon, and they start firing cannonballs at Alice and the animals. 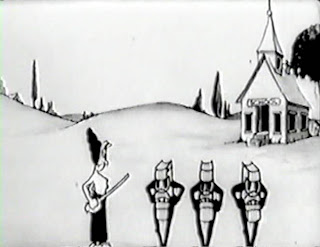 Alice decides to form her team into a counter army, but it’s not-yet-named-Julius the cat who comes up with the ultimate answer – a pepper cannon. He fires pepper at the books and the teacher, and the books sneeze their pages off, ending their threat. But the teacher is undeterred, and chases Alice down to begin poking her with a sword. This, of course, wakes up the real life Alice, which ends the film. 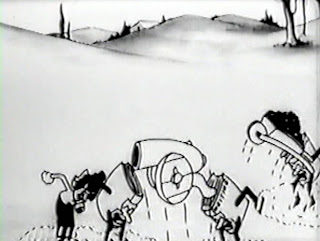 It’s not that this film is bad by itself. But when you have viewed all the previous shorts, like I have, it doesn’t show any growth from the first Laugh-O-Gram fairy tales. The same dancing motions and party scenes are used, as well as the running and jumping motions used by the teacher and the books.

One thing this short does, though, is continue the anti-authoritarian streak. Once again, the authority figure is demonized in this film, as the teacher is even given horns in the animated sequence. It’s a similar thing to the dog catcher, the king and others in previous films. At this time, Walt seems to have a high disregard for authority figures, which is something to watch out for moving forward.
Posted by Ryan at 4:58 PM