Once again, let me thank Tom Stathes of Tom’s Vintage Film for helping me out by tracking down this film. If you’re looking for old animation, not just Disney but all kinds of things, like Felix the Cat, Farmer Alfalfa and more, check out his site and grab some memories. 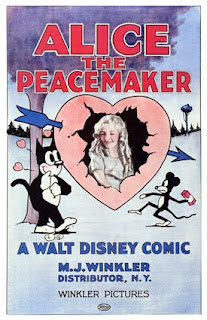 Okay, so the time has come, the time is now. Alice the Peacemaker, how is it? The answer is, surprisingly different from the previous Alice Comedies.

It’s no understatement to say that viewing this film made me understand once again why I’m doing this project. With Ub Iwerks joining the Disney studio to work on this film, my eyes are now opened as to his full contributions to the success of the Disney films. What do I mean? Let me summarize the short, and then we’ll talk about Iwerks’ contribution.

The whole thing opens with the live action framing sequence, featuring two newsboys fighting over the same territory. After they scare off a couple of prospective customers with their fighting, Alice wanders in, and tries to get them to be friends. To do so, she tells them a story about a cat and a mouse that she used to know that had the same exact problem. 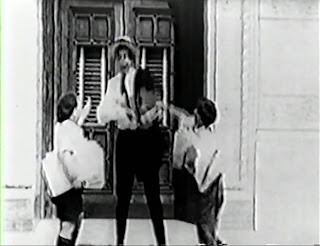 With that, it’s on to some wonderful Ub Iwerks goodness. The cat is back! Our friend the cat from the Laugh-O-Grams fairy tales has returned. That was my first revelation, was that the cat had to be an Ub Iwerks creation, because he has not appeared in the Alice Comedies before this, that Ub was not involved in. Although he would eventually be known as Julius, right now, the cat has no name. 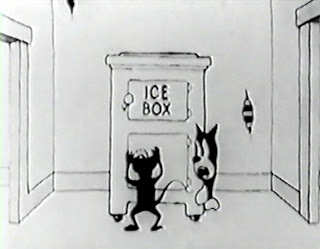 The cat is trying to get into the icebox, as is a little wily mouse. The second thing I was stunned by was how much this mouse looks like Mickey. It should not be surprising, considering both were drawn by the same man, but this mouse is simply a smaller version of what we would later see in Steamboat Willie.

The cat and mouse fight, getting thrown out of the house after disturbing a couple about to kiss, and they land on Alice. Alice and the two animals flee the house, and once again, Alice begs them to behave and support each other. At first they refuse, but soon they’re grudgingly seeing eye to eye. 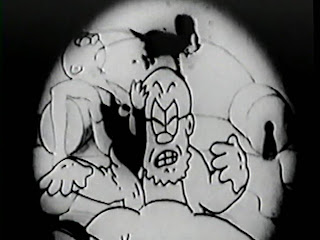 The happiness does not last, as the dog from the earlier fairy tales comes back as well, playing the role of a police officer. The dog spots a wanted poster with the cat and mouse on it, and the chase is on. Finally, after some quick dodges and jumps around the dog, Alice devises a plan.

The cat and mouse hang a sheet in front of a horse’s rear, paint their pictures on it, and watch as the dog attacks the sheet, gets kicked by the horse and goes sailing through the air. It’s a clever sequence that uses the cat’s tail as a paintbrush, and features a giggling horse. How could you not like that? 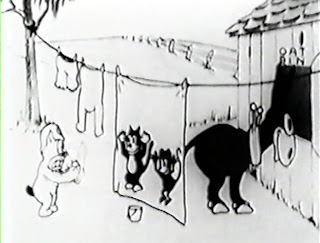 We return to live action to see Alice and the boys deciding to work together, and we are done. And with that, Disney is back to being an animation studio. It had become unclear watching the evolution of the earlier films, how committed Disney was to animation, or if he was simply using that as a tool to get into the marketplace. By watching this film, it seems clear that he simply did not have the artists to make animation work, because the cartooning in this short is vastly different than the others, because of Ub Iwerks.

The quality is back up to the level of the Laugh-O-Grams, which were markedly better than the later Alice shorts. It was a slight drop off at first, but became more and more noticeable, to the point that Alice the Dog Catcher barely had any animation in it. But now, with Ub on board, Alice the Peacemaker really shows the studio rounding into a fully realized cartoon outfit.

You really have to watch all the Alice Comedies in a row to understand the impact that Ub’s appearance had on the product. Go to Tom’s site, order the DVD, and check out Alice the Peacemaker, and you’ll understand.