Alright, only 2 more films left. One thing I want to note is that I’m now on Twitter. If you look to the left, you’ll see my postings, and you can follow along on Twitter. I’ll post an update there when the blog is updated, so people can know when to shoot on over. 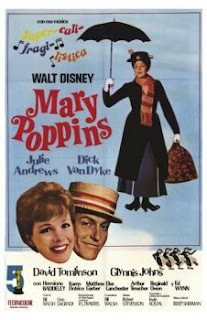 Yeah, I know, most people would have this as number one, but I’m not most people, as evidenced by the mere existence of this site. But there is no doubt that Mary Poppins is probably the crowning achievement of Walt Disney Studios, then Walt Disney Productions. Even though I may like the film I will review tomorrow better, Mary Poppins is the gold standard for all Disney films.

Mary Poppins combines all the things that Walt Disney had achieved to that point, and improves upon his existing formulas. Live action comedy, musical numbers, animatronics, animation and special effects are all on view, but all are subservient to the charming and beautiful story of a pair of young British children learning about the love of a parent through their magical nanny.

You must start any review of Mary Poppins with Julie Andrews. The two are inseparable. There was no doubt that she deserved her Best Actress Oscar in 1964, because she brings just the right amount of spite and arrogance to what could be a syrupy sweet character. Andrews manages to balance the good will and happiness of Mary Poppins with an almost militaristic insistence on order and a supreme confidence that borders on the uncontrollable. But just when you think she might veer off in the wrong direction, she reins it in, delivering a career defining performance. 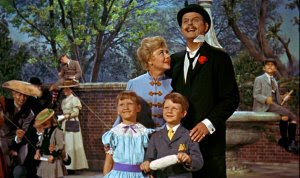 I’ll admit, having an Irish-Scottish background, that Dick Van Dyke’s accent grates on me a bit, but I still think he’s perfect in the role of Burt, the chimney sweep/one man band/street artist who follows the wind as much as Mary Poppins does. He also gets the chance to show off as the bank president who dies laughing at the end. The children are serviceable, but the great David Tomlinson as Mr. Banks is the highlight of the secondary characters. Glynis Johns as Ms. Banks is amusing, but Tomlinson is the straight man that offers perspective on the craziness going on in the Banks household, before finally succumbing himself. 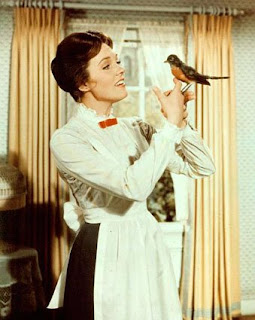 The music, though, is what really propels this one to the top of the Disney canon. The Sherman Brothers’ most recognizable songs come from this film – “Supercalifragilisticexpialidocious,” “Jolly Holiday,” “Chim Chim Cheree,” and “Feed the Birds” are all still heard in Disney parks world wide. Each is instantly memorable, and Andrews’ delivery is immaculate. 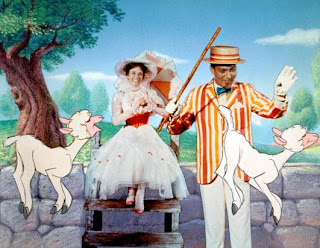 To me, the way this film plays out is what I want from a Disney film. As you know from my earlier reviews, I’m a big devotee of story telling being tightly focused. However, when I watch a Disney live action film, I expect a bit of divergence and flights of fantasy and comedy. Mary Poppins delivers that in spades. The main story never loses steam, but the divergences into the animated part, the laughing scene and others give the film that touch of whimsy that make it quintessential Disney.
Posted by Ryan at 2:49 PM