After the short throwback in yesterday’s short, Alice Gets Stage Struck, we’re back to pure animation today with Alice Wins the Derby. At this point, we’re well along into Margie Gay’s turn as Alice, and this short brings back the quality that was seemingly lacking from Alice Gets Stage Struck and Alice Loses Out. 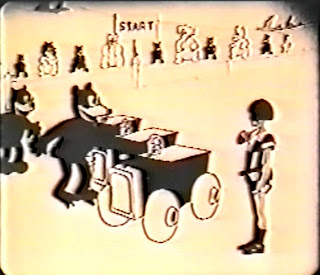 It’s an interesting concept, as the short opens with Alice, Julius and a new version of Pete (some sort of bear/dog creature) competing in a derby. But it’s a new kind of derby. The first half of the race is in cars, and the second half is run on horses. Very unique idea, kind of like a lazy biathlon. 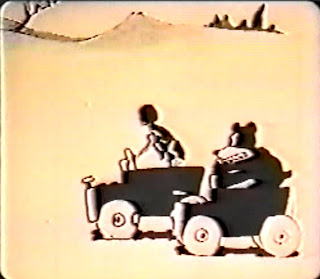 The gun sounds and Alice and Pete take off, but Julius’ car takes off the wrong direction, as he panics and tries to get it headed the right way. Pete changes the “Detour” sign, sending a frantic Julius down the wrong path, eventually chasing him up a cliff, where there is a good sequence of the car trying to pull itself up. 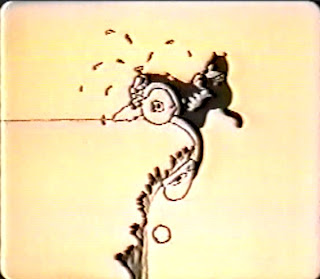 Meanwhile, Alice and Pete reach the horses and take off into the lead. When Julius catches up, he mounts a horse nearby, which is a mechanical one. This is the first of many mechanical animals that will appear in the Alice and Oswald cartoons, so it’s interesting to see it here.

The mechanical horse gives Julius all sorts of problems, running sideways, up, down and even backwards. When the horse starts running backwards, Julius simply swaps the head and tail, making his backwards horse face forwards. 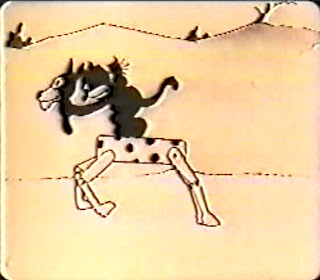 Eventually, Alice and Pete’s horses jump a fence, with Alice getting stuck on the other side with a bucking horse, while Pete sails towards the finish. We cut to Julius and see a few gags there, like the rear legs falling off. Julius uses his question mark over his head to pluck a balloon to elevate the horse’s rear and keep going.

The climax comes when the bucking horse tosses Alice right into Pete, and she rides his horse over the finish line to the victory. Pete sails back into Julius and they glare at each other for a few brief moments before we see the crowd cheering Alice at the end. 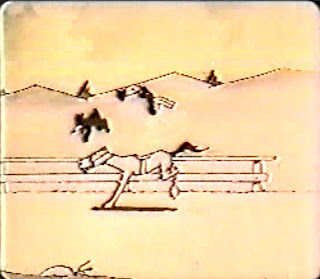 It’s a simple short, to be sure, but the narrative element of the race helps to unify the story, providing this short with better storytelling than the last few. As usual, Julius carries the action, providing the bulk of the gags and the momentum to the cartoon. When Alice is on screen, things tend to slow down. This was eventually the decision that led Disney to quit making the Alice comedies, but that would not be until the end of 1926. In the meantime, they used all the studio’s resources to get these films out as quickly as possible, to the tune of at least one per month. Perhaps that is the reason for the inconsistency from film to film.
Posted by Ryan at 2:13 PM